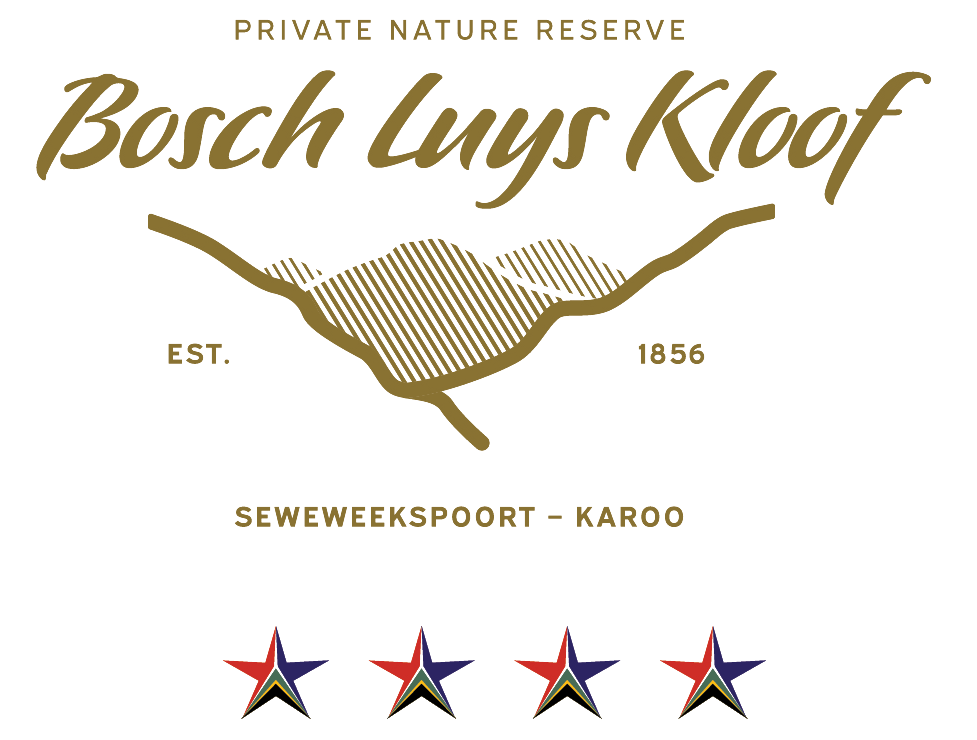 Bosch Luys Kloof Private Nature Reserve lies on the northern slopes of the Swartberg mountain range and includes the foothills of the Groot Swartberg. Besides the western entrance, the whole of the Reserve is surrounded by other nature reserves.

To the south, lies the well-known Gamkaskloof (“Die Hel”), on the eastern border is the Gamkapoort Dam and to the north is the Elands and Blouberge.

Bosch Luys Kloof is on the border of the Klein (Little) and Groot (Great) Karoo. Only 4km south-west of the entrance gate is the beautiful and well-known Seweweekspoort.

Height above sea level is from 500m to about 1400m at the highest point – a clear indication of the hilly landscape.

The Reserve is of considerable natural beauty and interest in respect to geology, fossils, botanical value, scenic beauty, etc. There are many different sedimentary formations running through the area, as well as rapid changes in soil and vegetation, year-round.

“All the animals are wild and live naturally off the veld. To encounter the animals during a visit to the Reserve is a true wildlife experience.”
Currently, the Reserve carries about 400 Chacma or Cape Baboon and antelope, including the Greater Kudu, Cape Eland, Gemsbok, Red-Hartebeest, Springbok, Common Duiker, Klipspringer, Steenbok, Grey Rhebok and Cape Grysbok. The Rock Dassie (Hyrax), Porcupine, Lesser Grey Mongoose, Small-spotted Genet, Scrub Hare, Hewitt’s Red Rock Rabbit, Striped Polecat and Bat-eared Fox are some of the smaller mammals present. Larger carnivores include the Black-backed Jackal, Caracal, Cape Mountain Leopard and African Wild Cat. Vervet Monkeys, Honey Badgers (Ratel) and Leguans have also been seen on the Reserve. A small breeding herd of Burchell’s Zebra was introduced in 2010.

Bosch Luys Kloof encompasses five vegetation/veld types. The borders overlap, but overall demarcation is fairly distinctive. The karroid thicket covers some 4 000 hectares and stretches east/west over the middle part of the Reserve, just south of the river bush. It is an endless sea of Karoo-koppies that extend to the Hartmansberg and is home to the Cape Hyrax and Verreaux Eagle, including the antelope that roam the area. More than 1 300 hectares are covered in spekbos with patches of grass. Trees and shrubs include sweet thorn, karee, ghwarrie and taaibos. Many drainage lines contain water for long periods.

The Karoo broken veld extends some 3 500 hectares in an east/west line to the north of the river thicket. It consists largely of smaller shrubs and trees along the drainage lines. Although similar to the karroid thicket, it lacks the large spekboom thickets. You also find succulents here that are again scarce in the thicket. Common trees, shrubs and bushes are ysterbos, sosatiebos, kougoed, kriedoring, ankerkaroo, ribbokbos, granaatbos, numnum, ghwarrieson and vanwyksbos. Our mountain fynbos area extends over the highveld of the southern reserve, stretching east/west over some 3 000 hectares and incorporating Hartmansberg that runs through the middle of Bosch Luys Kloof. It contains all three elements of fynbos, but the proteas are scarce. Patches of grass are present but tend to be sour. It overlooks the valley of the ‘Hell’ and is magnificent for sightseeing across the great Swartberg mountains. Our river bush follows the Bosluiskloof river for about 18 kilometres down to the Gamkapoort Dam and covers some 1 500 hectares. It is covered by mainly sweet thorn trees that wonderfully don’t lose their leaves in winter because of the high water table. Apart from grasses, shrubs like ghwarrie, kunibush, ganna, karee and jakkalsbos occur. Right up in the far north-west corner is a unit of renosterveld that extends some 1 500 hectares. Resembling a transition between fynbos and broken veld, it is mountainous, not easily accessible and somewhat isolated.

Because of overgrazing, for example, during South Africa’s ‘wool boom’ between 1955 and 1960, parts of the reserve were over utilised. Fortunately, and unplanned, this all ended with the construction of the Gamkapoort dam. It cut off the valley from Prince Albert in the east, which was close and easy to reach. Since then, very conservative or no stocking took place, and we can see the improvement. However, it is a long process that is mostly advanced by above-average rainy periods/seasons. And for those, we can only pray! It appears as if there are fortunately still enough adequate seed resources.

Armed with a pair of binoculars and a decent bird book, you can have many hours of fun birding at Bosch Luys Kloof. Covering five different plant biomes, the Reserve offers various habitat requirements for a diversity of bird species. There are seasonal migrants such as the swallows returning to renovate and occupy old nests during our spring and summer months, waterfowl using the Reserve as a stop-over on their daily excursions from the Gamkapoort Dam to adjacent farmers’ crops, and the numerous resident species.

As seasons change, so will the bird activity. But as a rule, most birds are active from dawn until around 10:30 and in the evening from around 16:30 until last light (excluding nocturnal birds like most owls, nightjars and dikkop species). The acacia thicket with its thorny wall of defence offers sheltered nesting sites for a variety of species. Black Eagles and Rock Kestrels prefer the rocky outcrops and cliff faces of this mountainous terrain.

We have two designated bird hides, but if you look out from your chalet in the morning, you should be able to see several different species. The garden area around the lodge is also a popular spot as it is always green and has readily available water.

A birding checklist is available at the lodge. See how many you can tick off during your visit, and if you spot any undocumented species, please let us know so we can add them to our list.